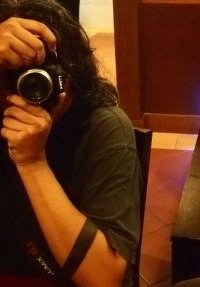 SUFIAN Abas is a sulky young man who smells like freshly-pressed laundry. He takes stunning photographs … but (it is said) they are nothing compared to his beautiful, detailed work in cross-stitch.

He tap dances. He enjoys skinny-dipping. And climbing trees. He loves horses, especially unicorns. He dislikes children, but thinks they might be delicious curried, or roasted and served with carrots and potatoes.

Sufian claims that he was once nearly murdered by a witch.

He mutters to himself and glares at thin air. When he smiles, he looks dangerous. When he laughs, you suspect you are the butt of a private joke that he would not share even if you pulled the nails off his fingers. 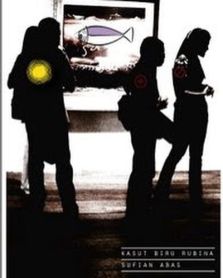 He’s definitely not your average guy and his short stories are far from ordinary. When I picked up his debut collection, Kasut Biru Rubina: Koleksi Fiksyen Pop Untuk Jiwa² Hadhari Vol 1, I had just finished reading two other anthologies, one by a local writer and the other by a Singaporean.

To be honest, I was a little perplexed. The writing in both the collections wasn’t as good as I’d been led to believe by the reviews in blogs; the stories themselves, I felt, were quite ordinary, even predictable.

I bought Kasut Biru Rubina for three reasons: I liked the cover, it was cheap and I’d been told the stories were interesting and unusual.

I was a bit hesitant because the book is written in Malay – I got a P7 in Bahasa Malaysia for my SPM (P8 on second attempt). However, I was told that I would have no trouble understanding the language used in Kasut Biru. I was told that if I could handle chatting with taxi drivers and market vendors, I’d be able to read these stories, no problem.
He says he has dreams in which he’s the Prime Minister of Singapore.

Well, the last time I read a book in Malay was when I took Malay literature as an A- level subject (in Singapore, I hasten to add) – that was more than 20 years ago, and so I was more than a little rusty when I started reading Sufian’s book.

Immediately I spotted several words whose meaning escaped me, but once I got into the swing of things, once my brain became accustomed to processing the alphabet and words arranged in a relatively unfamiliar sequence, once I could go read on autopilot and start paying attention to the stories, I was riveted!

Sufian himself says it took him a while to get used to writing in Malay, more precisely the type of Malay that he uses in Kasut Biru.

‘It’s supposed to be the sort of Malay you hear on the street, it’s the Malay people actually use and understand,’ he says when we meet at Silverfish Books in Kuala Lumpur.

‘It’s language that I hope will appeal to people who don’t normally read. So-called literary people – the Malay literary crowd anyway – are not interested in stories like these.’

He refers, with a smirk, to the sort of books that are being published by Dewan Bahasa dan Pustaka as ‘literature with a purpose’.

‘There is a small group of writers who write for themselves and each other, and they write in the same old florid style. There is no attempt to simplify the language so that it will be understood by the average Malaysian, and yet not insult his intelligence.

‘There is nothing between heavy literary prose and the sort of trash you find in Malay romance novels.’

‘The stories are too short, too weird, they would have been rejected for sure.’

He describes his work as ‘a more down- to-earth kind of magic realism’.

This term is used to describe the sort of writing in which the fantastic appears in an ordinary setting or, as Sufian puts it, ‘strange things happen to normal people’.

In Kasut Biru, for example, there’s the tale of a woman who wakes without her body and finds that her husband is headless (Melah & Jusuh), and the story of Asri who has to cope with mythological beasts (including unicorns) trotting out of his mouth (Asri Mula Panik).

Sufian’s personal favourite is Malam Ini, Malaikat Tidur, a story that really depressed me. In it, a little girl waits for an angel to deliver a unicorn as a birthday gift. As the sun sets and there is no sign of the creature, Lili’s mother attempts to placate her with fried chicken. The child seems doomed to be disappointed and disillusioned, but Sufian thinks it’s a hopeful story.

‘Who knows what will happen …,’ he says. He doesn’t. Once a story ends, he says he stops thinking about the characters and the situations they’re in. ‘When I finish writing, that’s it. I forget about it. Then when I finally re-read it, it’s as a reader. I’m no longer the author.’

I’m dying to know what lies in store for some of his characters, but Sufian doesn’t feel inclined to revisit any of them.

His next collection (volume two of the planned three-volume set) will be ‘something quite different – probably stylistically and thematically more philosophical,’ he says.

The book will probably be published in 2009. This year, Sufian’s imprint, Sang Freud Press, hopes to publish short story collections by two women writers. ‘I found their stories in blogs – the only place to find good writing in Malay,’ he explains. 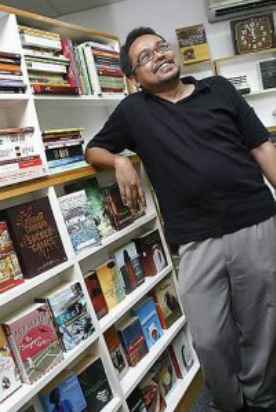 He thinks more Malaysians should write in Malay.

‘I think non-Malay writers should really try to write in Malay. I think they would bring something different to the language.’

He insists that there should be no restrictions and no worries about grammar. ‘Languages change. Bahasa Malaysia is what Malaysians speak, whatever the version.’

Sang Freud Press is something Sufian plans to concentrate on full time.

He has dabbled in copy writing and graphic design, but thinks it’ll be worth his while to devote his time and energy to ‘saving Malay fiction – it needs to change, it needs to be more than just a load of boring novels that nobody can bring themselves to read’.

Although Sufian is fluent in spoken and written English and tends to read English novels, he thinks he will continue to write in Malay.

‘So much good English fiction already exists, I don’t see why I should write in that language. I have nothing to add to it. I don’t think I have anything new or special to say in English. But in Malay, the possibilities are endless.’