The next time someone who has never read high fantasy asks me to recommend a book to start with, I shall point them in the direction of Dark Lord of Derkholm. It’s a parody of the genre, but also a good example of a high fantasy novel.

It is also packed with irony (a joke in itself considering the effect iron has on magic and how magic is the backbone of high fantasy), is delightfully subtle, and lacks the tedious self-importance  that plagues most of these works.

Derkholm is set in a world that is practically enslaved to host fantasy adventures for tour groups from another world (which sounds like ours). These organised adventures are practically all that the inhabitants of the world do; it’s being going on for years; and they’ve just about reached their limit.

A decision is made to put a stop to the tours and two oracles are consulted as to how to go about doing so. The book recounts what follows.

It’s genius how DWJ hides the main tropes and themes of high fantasy (like the reluctant hero and the battle between good and evil) behind the sham situation that is the plot of Derkholm. Nothing is quite what it seems as every character is playing a double role in the story, and fulfilling meta roles too.

As with all DWJ’s books, the moment everything clicks into place is so hugely satisfying that you can almost hear your bones and brain sighing in contentment. I’ve heard that the author had once mentioned that she wrote her novels without much planning, but simply by letting the story flow out of her. Sounds like magic to me.

This re-read was done via audiobook (using Scribd), published by HarperCollins UK Audio and narrated by Jonathan Broadbent.

I saw this take on BBC Radio 4’s Desert Island Discs on Calmgrove‘s site and thought it’d be fun to do. Who doesn’t love the radio programme? With books, it’s just up my alley, but in my version I’m doing books and music. Is this cheating? Well, it’s all a fantasy anyway, so …

So, here’s what’s allowed if you’re stuck on a remote island with no hope of rescue:

i. eight books: The ones you want are, by some miracle, growing on the mango trees in the well-stocked forest that spreads lush and green over a large part of the island.

ii. eight pieces of music: Snap your fingers and they are played on shuffle, pouring out of the morning glory blooms that grow on the island.

iii. a podcast, TV show or movie – for when you really wish to take a break from reading and listening to music.

iv. one luxury you can’t do without — let’s just say the island has plumbing OK? I don’t want to waste my luxury on a flushing toilet. END_OF_DOCUMENT_TOKEN_TO_BE_REPLACED

A book club I belong to is reading Susan Cooper’s The Dark is Rising Sequence next. We spent the last six months reading The Thief Series by Megan Whalen Turner and so, having immersed ourselves in the world of Attolian politics, diplomacy and intrigue, we will now be entering a world of Celtic magic and mythology and lingering there a while. 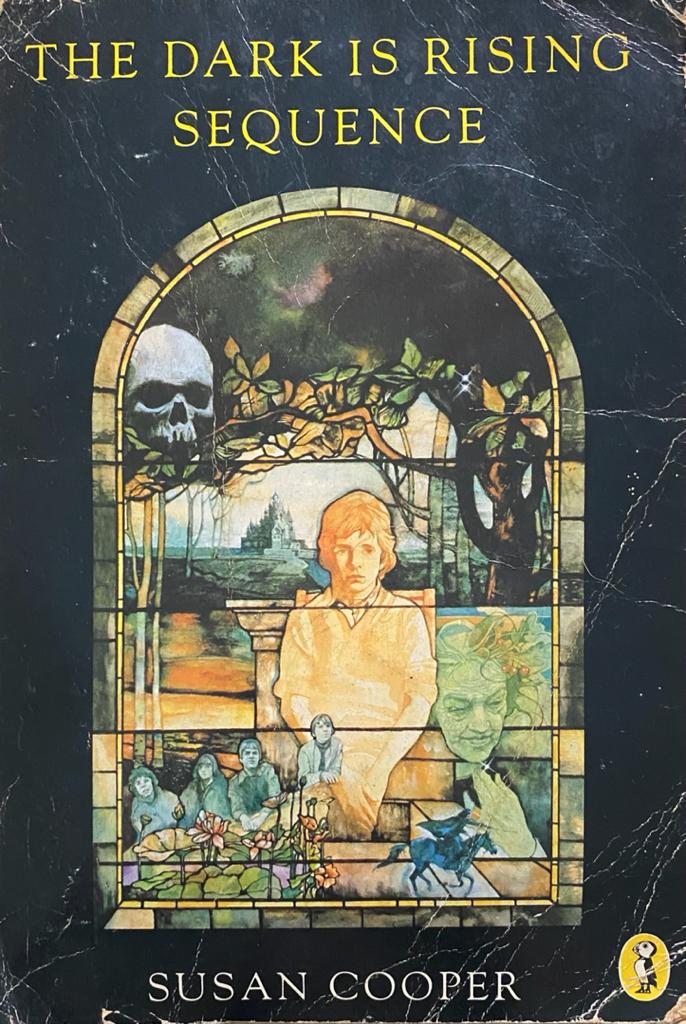 The books in The Dark is Rising Sequence are Over Sea, Under Stone; The Dark is Rising; Greenwitch; The Grey King; and Silver on the Tree. I will try to blog about the books as I re-read them. I used to read the sequence every year but I haven’t done that in a while. After all this time, the thought of reading them again is still giving me a thrill. I first encountered the books back in 1988 (the Penguin Omnibus edition in the picture is the very book I found, in one of the secondhand bookstores on Bras Basah Road) and I remember reading them over a rainy weekend when I was between lodgings and staying at Singapore YWCA. The YWCA was not, then, the modern building you see these days on Fort Canning Road. I can hardly remember what it was like back in the 80s except that it was old, worn, with creaky floorboards and peeling paint. If I’d had a smart phone then, I’m sure I’d have taken countless photos. As it is, I can’t even picture the building (was it blue and white?), nor the dormitory where I slept. However, the old house and the rainy weather must have fit well with Cooper’s magical world and the old battle between the light and dark that she brought so vividly to life. I read all five books in that weekend. I can’t wait to re-read them, starting with Over Sea, Under Stone. The challenge will be not to read the whole sequence in one weekend.