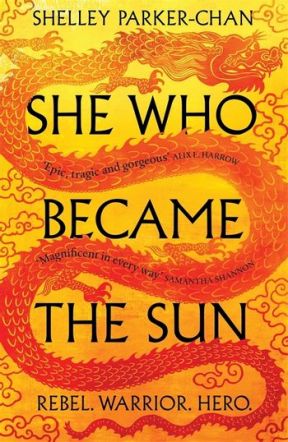 Peasant boy Zhu Chongba is promised greatness by a fortune teller, while his sister (unnamed throughout the book) is declared ‘nothing’. But when Chongba dies, that sister (already shown to be the more shrewd and competent of the two siblings) decides to take on his identity and claim the greatness that Zhu Chongba’s destiny. To escape starving in the famine that grips the land, the girl goes to Wuhuang Monastery, which her brother was dedicated to as an ailing infant, and by sheer will and persistence, is enrolled as a novice monk. Thus begins her life as Zhu Chongba and despite setbacks and hardships, she does succeed, first at the monastery where her potential is recognised by the abbot, and then as one of the leaders of the Red Turban rebels and so on to the ultimate triumph: the dragon throne.

No spoilers — this novel, Shelley Parker-Chan’s debut, is the first book of a trilogy about the rise of the first Ming emperor. We come to the book knowing that the main character (Zhu) will achieve her goal. How she goes about it and whether she becomes great simply because she has tricked Heaven into thinking that she’s ‘Zhu Chongba’ or because it is her destiny (despite her gender) to be great are questions that fixed my attention and held the story in my mind when I was not in the middle of it (I listened to the audio recording) and even after I completed it.

Parker-Chan’s story is a fictionalized account of the events surrounding the end of the Yuan Empire, but some of her characters (including Zhu) are based on people who existed. Like any historical novelist, Parker-Chan imagines these people to life and invents possible lives and inner lives for them. In The Sun, she takes things further by not only making the first Ming emperor a woman (impersonating a man) but allowing her a wife (based on another historical figure, Ma Xiuying, the Emperor Zhu Yuanzhang’s empress) who is aware of Zhu’s gender and engages with her, practically, romantically and sexually, because she’s a woman rather than inspite of it.

There are also totally fictitious characters. Ouyang, a eunuch general whose family was slaughtered by the leaders of the Mongol clan he serves, and Esen Temur, the lord whose army Ouyang leads are two such characters and the ones whom I found most intriguing and compelling. Ouyang is torn between love and hatred for Esen, but I’m still not sure if Esen is in love with the general and chooses to ignore his feelings and desires, or if those feelings are indeed purely platonic. (Am I dense? I’ll have to read the book again to decide.) Whatever the truth may be (and it seems to me that  Esen himself doesn’t know), the inner turmoil experienced by Ouyang and the ambiguous relationship between the two men are deliciously uncomfortable and complicated and offer yet more food for thought.

I usually avoid books with battle scenes and too much intrigue and scheming, and I avoid descriptions of executions and torture like the plague, but listening to an audiobook didn’t allow me to skim or skip the scenes I probably would have if I’d read the book. As a result, I was present for all the blood and gore, including one scene that didn’t go beyond a straightforward statement about how a man was put to death, but was still too shudderingly evocative and vivid for my tastes, damn my overactive imagination.

I’ve been listening to a lot of audiobooks in the last couple of years and have encountered a few narrators who’ve not done the books they’ve read any favours.  However, Natalie Naudus who narrates The Sun is one of the best I’ve heard. Her voice is pleasantly pitched, and her pronunciation crisp and precise. As far as I can tell, she handles Chinese names well, and she does not put on any hammy accents. 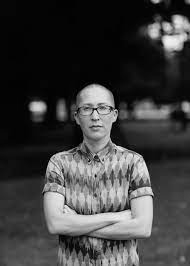 I’m not sure when the next book in the trilogy will be released. I have this problem where I often end up not finishing a series if I read the first book when it’s new(ish). Even if I love it (like I did Ken Liu’s Grace of Kings), I am likely to miss the release of the second book or have forgotten the story and need to re-read the first book but won’t have time to do so. I should remind myself to wait till all three books (or most, in the case of a longer series) are out before starting anything in the future.

Parker-Chan is definitely someone I’m returning to though, sooner or later. Her writing sings, making the clearest and most striking pictures, giving shape, sound and smell to characters and places. And when it comes to the fantasy element, the author employs the lightest touch; the magic, whether a natural or an unnatural feature in human lives, always subtle and hardly remarked on). In fact, I’d say The Sun is more an alternate history with touches of magic realism than full blown fantasy, just how I prefer it, really.