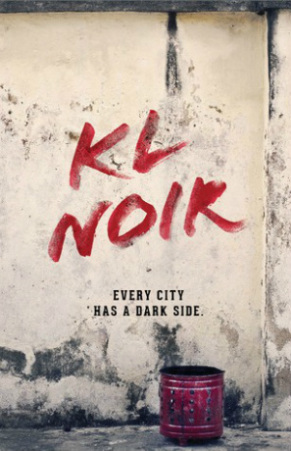 FIXI NOVO is the English language imprint of Amir Muhammad’s hugely successful Buku Fixi. Actually, I lie: according to the description on Fixi Novo’s Facebook page, the imprint publishes books in the American language, while its Manifesto declares that American spelling is used because “we are more influenced by Hollywood than the House of Windsor”. Fair enough, not that the distinction hits you like a ton of bricks or anything: Malaysians seem to use American and British spelling interchangeably and, if we’re talking terminology, most of us are, I believe, equally comfortable with bonnet and hood, lift and elevator, biscuit and cookie, and so on … and probably wouldn’t even be able to identify which term is American and which British.

The point is to position Fixi Novo as an unabashedly non-literary imprint (“pulp fiction”) that’s supposed to appeal to the unpretentious, unwashed masses – in particular the “young, the sengkek and the kiam siap” – no italics please!

What I like most about Fixi Novo is that, like its parent company, it focuses on contemporary urban fiction.  I must say though that although I’ve had quite enough of Malaysian stories set during the Japanese occupation or the Emergency, contemporary rural fiction wouldn’t be unwelcome. At any rate, the imprint might want to consider looking to other than only our capital city for material. Having spent my teens in Batu Pahat, I’d say that Malaysia’s smaller towns are at least as seedy as KL’s dodgier districts and would be the perfect setting for the sort of literature that is supposedly the focus of Fixi Novo’s Noir series.

I say supposedly because the first book, KL Noir: Red might not coincide with your idea of the genre if you tend to associate it with the kind of hardboiled crime fiction that features cynical, chain-smoking private eyes, and amoral and seductive beauties who look like they’ve been poured into their outfits and are always called broads or dames, never women. Then again, this is KL noir, and I quite love the idea of our writers reinventing the genre to fit Kuala Lumpur’s special brand of sleazy seaminess.

Here, noir isn’t just about crime and violence, but also the supernatural, with the city’s shadowlands offering an alternate definition of noir, and adding a layer and dimension of darkness.

Malaysians are a superstitious lot, and the belief in other worldly beings and the black arts are more the rule than the exception. Strangely, this collection does not feature crooks in cahoots with spirits – think ‘pukau’ gangs and the infamous Mona Fandey, for instance. (Perhaps all that’s to come in at least one of the next three volumes – White, Yellow and Blue.)

Meanwhile, there are hauntings, possession, ritual sacrifice, sex, drugs and even rock ‘n’ roll (if you count the quartet, with their Chinese classical instruments, in Lee Ee Leen’s The Oracle of Truth, or the busker in Vanished by Khairulnizam Bakeri), with (violent) death featuring in most of the stories.

The violence is grisly and gleeful, but the sex feels contrived and gratuituous. For example in The Machete and Me, the protagonist’s cousin is a lesbian for no other reason, it seems, than to give the author (Dayang Noor) the excuse to describe her nubile girlfriend.

And I am not convinced by the sharply dressed thwarted lover and his string of one night stands with tudung-clad women in A Kiss from a Rose by Fadzlishah Johanabas. Is this story an attempt to raise an eyebrow or two, or to make a clumsy point. Either way, it stumbles on over its Bally loafers.

My favourite story, Cannibal Vs Ah Long by Megat Ishak, is an extremely gory and sickeningly satisfying fantasy about bad debts and big appetites. Megat writes with panache and confidence, and a palpable sense of glee. You can almost hear him chuckling as he describes the slicing, dicing and gorging. His protagonist is perhaps the most creepily charismatic cannibal since Hannibal Lecter, and the loan shark, Machine Gan … oh my goodness, what a fabulous name!

After Dark, My Love is the one non-fiction piece in the collection. Taken from Dina Zaman’s book I Am Muslim, it describes the grottier side of KL, but can’t really decide what it’s trying to say … apart from that there is a grotty side to KL. It’s the least compelling of the stories. Nevertheless it presents an intriguingly murky sketch of the city, which might surprise readers who know only the KL of gated communities, luxury condominiums and marble-floored malls.

Like most Malaysian anthologies in English, KL Noir: Red suffers from a lack of editing. As someone who makes a living as a freelance editor, I know only too well that publishers either don’t have the budget or the time to spend on a book (I also suspect some don’t have the interest). The result is work that isn’t quite ready to be published but is released anyway, and reviews saying Malaysian fiction is terrible. Or that it’s good … by Malaysian standards.

KL Noir: Red, like much Malaysian fiction in English, has the potential to be, if not a great book (I doubt Fixi Novo is interested in producing the great Malaysian novel or short story collection anyway), then definitely a more memorable, less throwaway one. The plots could be re-structured and tightened, the dialogue re-written to sound more believable and natural, the characters more fully developed and explored.

Amir Muhammad might argue that pulp fiction is supposed to be disposable, but would the writers in this collection really not prefer to be given a permanent place on readers’ bookshelves?