First published in The Star on 9th February, 2016 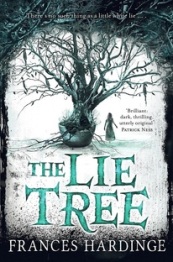 MY newsfeed informs me that The Lie Tree by Frances Hardinge has been named Costa Book of  the Year. That it is a children’s book is mentioned in the BBC article’s standfirst. Imagine, a
children’s book winning such a prestigious award!

When something like this happens, those of us who have always valued children’s literature are particularly delighted. As Hardinge says, in an interview with The Guardian, ‘“In the wider world, sometimes children’s fiction is seen as a bit lightweight in a way that is not deserved.’”

Indeed, this award may persuade book snobs of a particular kind to stoop to reading “kiddy lit”, but sensible readers who don’t need awards to tell them what’s worthy of their time, may already have discovered the dark delights of Hardinge’s seventh novel.

The Lie Tree is a Victorian murder mystery, set in Vane, a remote and windswept island in the
South of England. The Sunderly family has come to the island so that its patriarch, the Reverend Erasmus Sunderly may join in on an excavation of fossils. However, 14-old Faith, the older of the two Sunderly children, learns that her father is also fleeing accusations that he falsified the very paleontological discoveries that made him a celebrated natural scientist.

These inauspicious beginnings do not improve as the family are faced with recalcitrant servants, increasingly unfriendly townsfolk and, finally, the death of the Reverend Sunderly under mysterious circumstances.

While his widow, Myrtle, strives to convince everyone that the Reverend did not commit suicide, Faith believes he was murdered and sets out to prove it.

Her efforts lead her to form an uneasy, almost hostile alliance with the local curate’s son, Paul; and also to experiments with a plant that her father was studying.

This plant is supposed to feed and thrive on lies, its fruit ripening when the untruths are spread and believed. The fruit, when eaten, is said to reveal untold mysteries. Faith puts it to the test.

The lies she tells and the truths she learns, in visions, when she eats the fruit, are used to
manipulate the people around her and assist her investigations. Theories are tested, suspicions confirmed and secrets revealed. But are the lie tree’s powers supernatural, or does its fruit merely cause hallucinations that tap into the subconscious and enhance perception?

Faith’s tenacious and probing mind leads her to the truth behind the plant’s abilities, her father’s troubles, and his death. She is an engaging character, a clever child, with a hunger for knowledge that is inconvenient, to say the least, in the age she lives in.

“Listen, Faith. A girl cannot be brave, or clever, or skilled as a boy can. If she is not good, she is nothing.”

This is what her beloved father tells her shortly before his death. Her mother, meanwhile, is observed using her considerable good looks and feminine wiles to get her way. Is it any wonder that Faith feels desperate and doomed?

But despite the Victorian setting, and despite the accepted sexism of the times, it’s not that huge a leap between the difficulties Faith faces because of her gender to the restrictions and limitations still imposed on girls in the 21st century.  Even though 22-year-old MIT grad Sabrina Pasterski was recently declared the “new Einstein”, research has shown that girls are still discouraged by their parents and teachers from studying in STEM-related fields. And the way Faith is dismissed and rendered invisible by most of the men around her is something many adult females would still be able to relate to. We may have come a long way since the 19th century, but we still have a long way to go.

I found this book an exciting and engaging read, not least because of its protagonist Faith, the latest in a long line of resourceful fictional heroines that include Joan Aiken’s Dido Twite and Philip Pullman’s Lyra Silvertongue. Faith’s intelligence, pluck and resolve make her a character to cheer on and root for. Her plain appearance, her awkwardness, her wry, sarcastic sense of humour only add to her appeal. Even Paul feels it and his angry, urgent exchanges with Faith are one of the highlights of the book. Probably too young and inexperienced to know the reason for their mutual irritation, their ignorance of the sexual chemistry between them fills each of their scenes together with a thrilling tension that begs countless re-reads.

The potential for a full-blown, passionate and stormy romance is huge, but it remains to be seen if Hardinge feels the same way.

A promising love story aside, Faith expressing the desire to be “a bad example” is, to me, enough of a reason for a sequel. Surely, after being shown what Faith is capable of while still a bud, we should be given the chance to watch her bloom into something deserving more than just “a footnote in an academic journal”.