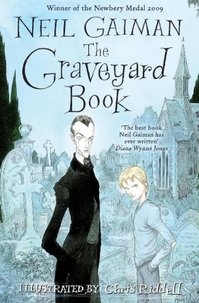 THIS BOOK opens with a murder – three murders, actually – and yet, I would call it a comforting book. A man, Jack, is sent to kill a family of four, including two children. The opening paragraph contains the description of a knife, its handle and blade wet with blood. But, yes, on the whole, a warm and fuzzy book.

The title doesn’t suggest a cozy story. Neither does the cover (a thin and ghostly woman astride a pale horse haunts the back).

Jack succeeds in killing all but one member of the family. The toddler escapes by wondering off into the night and ending up in a graveyard where he is protected by the spirits of the people buried there. A ghostly couple, Mr and Mrs Owens, want to adopt him as they never had children of their own. The toddler is named Nobody (later called Bod), because he looks like nobody but himself, and given the “freedom of the graveyard”, which ensures his safety so long as he stays within its environs. He also gets a guardian, Silas, who is not a ghost and also not human. Silas is his link to the world outside the cemetery. He brings him food and books, and organises his lessons (there are several school teachers buried in the graveyard).

Silas is a mysterious and intriguing character – probably a vampire although Neil Gaiman never calls him one. His friend, Ms Lupescu, who cares for  Nobody when Silas has to go on a ‘business’ trip, is also something more (or is it less?) than human. Both are refreshingingly unlike fiictional depictions of other-worldly beings, more practical and less inclined to take themselves too seriously.

Still, hardly the stuff comfort-reads are made of, huh? And yet, is it just the sort of book you want to curl up with on a gloomy, rainy day, a mug of hot chocolate at your elbow. It has many thrilling, nail-biting moments; it is a mystery and an adventure story, but it is also a heart-warming tale about a boy making his way in this unfriendly world with the help of friends and family. It is a book about love and loss, learning to trust, making mistakes and finding yourself. It’s a book, despite its setting, about Life.

Bod is an extremely likeable kid – as capable of petulance and pigheadedness as the next child, but basically a thoroughly personable chap. I especially like his ability to keep his wits about him in stressful moments; his willingness to admit and learn from to his mistakes; and the kindness he shows to others –not simply casual kindness either, but also acts that are a result of empathetic thought and effort.

As the story progresses it becomes clear that Bod’s life continues to be under threat. This is the least convincing aspect of the book because Gaiman does not seem to have given much thought to the motives of the murderer. Perhaps he had so much fun with Bod’s unusual life that he forgot to think about the Bod’s death until the last minute.

It turns out that Jack is part of an ancient Order, the Jack of All Trades. Jack was sent to kill Bod because it was forseen that if the boy survived it would mean the end of the Order. Gaiman never explains what exactly the Order is, does or stands for. Perhaps the vagueness and mystery are deliberate – Gaiman’s way of suggesting that the Jacks are beyond the realms of human understanding.

There are two versions of The Graveyard Book. The text is the same for both, but the illustrations (on the cover and inside the book) are different. The cover that accompanies this review is illustrated by Chris Riddell. His pictures are literal depictions of the characters as they are described by Gaiman. Riddell is also given to exaggerating forms and features so that his characters have the extreme and intense look of caricatures.

The other version of the book is ilustrated by Dave McKean who has collaborated with Gaiman on books like Coraline and The Wolves in the Wall. McKean’s illustrations are shadowy and abstract, often characters are depicted in silhouette – this style suggests the dark secrets associated with graveyards.

I prefer Riddell’s pictures, whch, I feel, invite the reader into the story. The artist’s straightforward approach seems to reflect Bod’s attitude to whatever fate brings. This is one eager, curious, wonderfilled lad. Living with ghosts has broadened his mind and widened his horizons: Anything is possible thanks to a life – endorsed by Death – most would have believed impossible.

Bod survives and thrives, against the odds. He lives, he loves, and he is loved – what does it matter if his nearest and dearest are not living? As the luckiest of us know, true love never dies.