I THINK it’s come to the point where 3D versions of movies are being produced just because. It’s like a matter of course, just like filming in colour. I don’t get it though. I mean, 3D effects are not necessary for all movies. I can understand why a superhero/action film might benefit from being 3D (Spider-Man leaping into your lap is, I believe, the sole content of some people’s sexual fantasies), but The Great Gatsby? Really? I fail to see the point, and I don’t intend to find out whether there’s one. (I wait, with dread, for a 3D Casablanca.)

Anyway, what I think about 3D movies is what I’ve recently started to think about pop-up books … which are, really, 3D books, or books with 3D illustrations. Suddenly, it’s like every title needs to pop, and, because of the very nature of pop-up books (their production is time-consuming and labour-intensive), the pop-ups are the main event, not the story – at least not when classics are turned into paper art. There’s no way the unabridged The Wizard of Oz could be made into a pop-up book (imagine the price tag!). Instead, massively abridged versions of these books are produced. Sometimes, only key scenes make it into the book as is the case with Robert Sabuda’s The Chronicles of Narnia.

Sabuda, and Matthew Reinhart are arguably the best known and most prolific pop-up artists out there. They have created (alone, together, and in collaboration with other artists) pop-up versions of classics like Beauty & the Beast, The Wizard of Oz, Alice’s Adventures in Wonderland [left], Cinderella, and The Jungle Book. However, I rather prefer their non-fiction work, especially the pair’s Encyclopedia Prehistorica series. With non-fiction, there seems to be more balance between text and illustrations. Also, the pop-ups are also there to information and, literally, illustrate, and are mere spectacle.

For something totally different to Sabuda and Reinhart’s work, check out French graphic designers Anouck Boisrobert and Louis Rigaud’s three gobstoppingly beautiful pop-ups: Popville, In the Forest, and Under the Ocean.

Popville is wordless book about the growth of a city. A single building flanked by trees pops up in the the middle of the first two-page spread, with each page-turn adding to the scene until, finally, we have a city filled with buildings of every shape and size, criss-crossed with busy streets. There are, however, no more trees. Perhaps the artists were hinting at the subject of their next book ….

Into the Forest begins with a pop-up forest populated by colourful birds and other creatures. The next page introduces a red and yellow machine in the midst of the green: A circular saw looms threateningly over the trees. More machines appear in the next spread. And there are fewer trees. Animals run for their life. But through it all, a sloth hangs sleepily from a branch … it’s fun (and a little frustrating) trying to spot it. On the fifth spread there is just one tree, and there’s the sloth. An orange claw is poised above tree and animal. What happens next is anybody’s guess. Perhaps the sloth gets away in time, perhaps not. The penultimate page tells of a man growing a new forest. Pull the tab and see small green shoots appear, then turn the page and see another rich, green world spring up. The sloth is back too … can you see it? 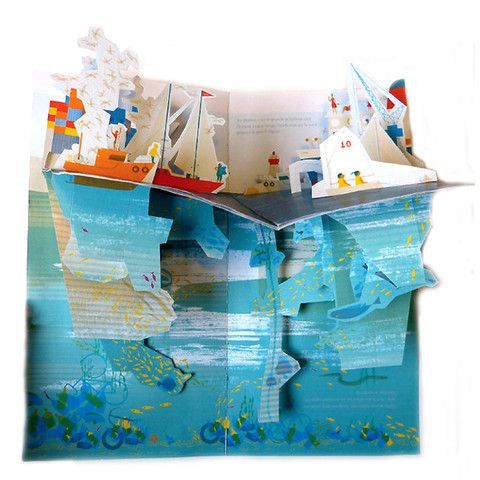 Boisrobert and Rigaud’s latest pop-up book is Under the Ocean [above], which chronicles the voyage of Oceano, a bright red schooner with a crew eager for adventure. The layout of this book is quite ingenious. Each two-page spread is divided down the middle by a flap that raises to form the surface of the sea. Oceano sits on the blue in the first spread, and far below are old bicycles and bottles, and schools of fish “dodging boat anchors and fishing nets”. Each of the following four spreads features the ocean in a different guise. There is calm blue water, its surface broken by the tail fin of a whale that swims down the second half of the page. There’s the Arctic with its ice floes, walruses and seals, even an Inuit fishing. Below this ice blue surface, killer whales and seals weave through icebergs in search of prey. Then there’s a grey storm, the page-divider no longer a flat surface, but folded to resemble choppy waves, while far below in the ocean’s murkiest depths a giant sea monster lurks, in the ruins of a sunken ship. Finally, a sandy beach, swaying palm trees and the crew playing in the “clear and sparkling” sea, exploring colourful coral reefs.

Unlike Sabuda and Reinhart, Boisrobert and Rigaud work on a much smaller scale. Their style is more delicate and dreamy, less – dare I say it – showy. Some might find their pop-ups less impressive, but I like the freshness of these original works.