IF you’re a fan of children’s books, you would think Ruth Krauss and Crockett Johnson’s marriage made in heaven. Both were writers of literature for young readers, and Johnson was also an illustrator.

In fact, he drew the pictures for Krauss’ best-known work, The Carrot Seed. Krauss also wrote one of my favourite illustrated books of all time, A Hole is to Dig, illustrated by Maurice Sendak. And Johnson was of course the creator of those wonderful books about a little boy Harold and the adventures he has with his purple crayon.

The Harold books are pure genius in their simplicity. They portray the truth, without embellishment: children draw with all their heart and soul and mind. They enter their creations, live them, imagine them into reality. That is what Harold does. His purple crayon is not magic, his imagination is. This is why you can give a child pencil and paper, or an empty cardboard box, and she will play happily for hours … that is if her imagination hasn’t already been deadened by an iPad or excessive TV-viewing.

In 1958, after he had had great success with four Haroldbooks and one called Ellen’s Lion, Johnson wrote and illustrated Magic Beach. However, his publisher, Harper’s, decided not to publish it, believing it too abstract for children. Later, the book found a home at Holt, Rinehart and Winston, and, in 1965, was published as Castles in the Sand, with illustrations by Betty Fraser.

Happily, Magic Beach, with Johnson’s rough sketches, was published by Front Street in 2005, with a foreword by Maurice Sendak. It’s a very handsome edition, with board covers and a cloth-covered spine stamped in gold.

In this story, two children, Ann and Ben go looking for a shell on the beach and, instead, discover how words and a little imagination can transform an ordinary day into a cracking good story.

Ann and Ben create things (jam, milk, a tree) by writing words in the sand. They even create a King, who asks the children if the world they’ve made is under their spell. “‘We just spelled words,’ said Ben.” Now doesn’t that give you shivers?
Some critics still think that children won’t understand this story, but what is there to understand? Ann and Ben write a world into existence, just as Harold draws the worlds in his adventures. The ending is somewhat abrupt, there is no definite happy conclusion, and some might consider the flooding of the world somewhat tragic and upsetting. But, if you’re reading this to a child, you can turn what happens into an exploration of how stories are created, and how they might or might not end. In this way, Magic Beach, like all the best children’s books, encourages interaction. For example, what does it mean when Ann wonders if there is time for a happy ending? How would more 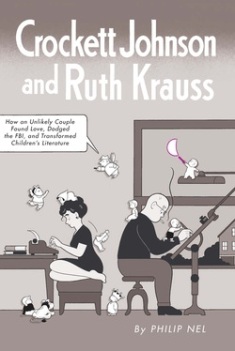 time change things? What different words might we write on the sand to change the story and the way it ends?

I haven’t yet shared this book with my daughter (as I’ve only just now re
ad it myself) but I’m looking forward to doing so tonight. I suspect it will give us much to talk about.

I’m also looking forward to reading Crockett Johnson and Ruth Krauss: How an Unlikely Couple Found Love, Dodged the FBI, and Transformed Children’s Literature. Adult fans of the couple’s work will no doubt find this critical biography by Philip Nel insightful and inspiring. I think they might also find Magic Beach even more meaningful than the Harold books. I know I do.