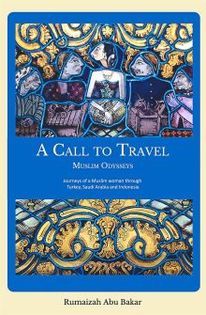 A CALL TO TRAVEL: MUSLIM ODYSSEYS

THERE was a period in my life when I read little more than travel books. It started with a re-reading of Bruce Chatwin’s What Am I Doing Here and In Patagonia, and continued, for more than a year, with books by Paul Theroux, Eric Newby, VS Naipaul, Redmond O’Hanlon, Pico Iyer, Colin Thubron and Vikram Seth. There was even one in which Edith Wharton travels through France in a motorcar, not to mention several by writers I’ve not heard of since.

Looking back, I realise that this was a time when I was a new, financially-strapped wife and mother. Armchair travel was, I guess, the most convenient and affordable means of escape from the mundanity of motherhood, a dead-end job and housework.

And it wasn’t as simple as the books transporting me via words and descriptions to strange new worlds. The destinations were only part of the attraction. What I really appreciated was the perspective of the authors – the way places and people were filtered through the lenses of their unique personalities and experiences, and how their reactions and views made you re-think your own opinions, question what you always believed, be fiercely scornful, or even feel inspired.

I looked forward to reading A Call To Travel: Muslim Odysseys because the perspective of a Muslim woman was one I had never come across before in a travel book. The fact that Rumaizah Abu Bakar’s travels took her to a number of Muslim cities and towns was a plus.

The book’s title suggests that these are not just physical, but spiritual journeys that the author embarked on, and I expected something personal and emotional that would take me further than just the sights, sounds and smells of foreign lands.

Although I am an atheist, I am very interested in the way people approach religion and carry out their religious obligations, as well as the manner in which their religion affects all aspects of their lives. I often find books written by the faithful moving and even inspiring, especially when the writers have a deep understanding of what they believe in, or simply a lively curiosity for it.

Rumaizah’s book offers very detailed portraits of her travel destinations: the holy cities of Mecca and Medina in Saudi Arabia, Istanbul in Turkey and a number of cities in Indonesia, including Yogyakarta and Solo.

Non-Muslims are of course barred from visiting Saudi Arabia, and the second part of Rumaizah’s book describes her experiences of the Muslim pilgrimages of the Hajj and Umrah; I was excited at the prospect of learning more about these events that are an important part of my Muslim friends’ lives.

But, while she paints clear and memorable pictures with her words, they fall short of immersing me in the experience. To achieve this, Rumaizah needs to give more, reveal more. I feel there’s a barrier between me and what Rumaizah has experienced, and it’s there because she holds back too much, or opens a door to a view and then slams it shut in a hurry.

Time and time again, she makes observations or offers morsels of information and opinion that beg to be elaborated on. Time and again, I am intrigued, my curiosity piqued, but Rumaizah then falls silent. She doesn’t comment at length, she doesn’t reflect on facts, feelings and situations.

When I asked the author about it, she said she didn’t wish to bore the reader by going on too much about a particular occurrence, place or person. Rumaizah was also afraid that saying too much may seem like she was imposing her views on the reader.

In the Turkey portion of the book, for instance, Rumaizah, on visiting the Hagia Sophia, says that she has difficulty grasping the fact that the museum was once a church before it became a mosque. She doesn’t, however, tell us why she feels this way.

Far from finding her a bore or feeling like she was forcing her opinions on me, I would have appreciated her personal take on things. After all, while there are any number of travel pieces that describe the Hagia Sophia, there can be only one description by Rumaizah Abu Bakar.

Another problem posed by this tendency to reserve comment is that she can sometimes come across as rather naïve and sheltered, not to mention narrow-minded.

For example, she comments on her fear of dogs, and, when in Indonesia, expresses qualms about donating money to a church. I feel that in such instances, the author needs to explore these attitudes and give the reader a chance to understand what might otherwise seem to some as unreasonable or ultra-conservative.

So, yes, I could have done with less of haggling over taxi prices and detailed accounts of getting lost in Turkey or elsewhere, and more of Rumaizah examining the differences in Islamic practices and her responses to these differences.

What I do really like about the book is that Rumaizah, for all her reticence in some areas, can be very candid when describing first impressions and the more challenging aspects of her travels. Relating her Hajj and Umrah experiences, warts and all, made them very real to me, which I truly appreciate as I wouldn’t otherwise know, firsthand, what these holy rituals are like.

As for the times when she encounters difficult people or situations, Rumaizah doesn’t mince her words, and is totally honest even if it means showing a less than accommodating side of herself. Once again, her candour is refreshing; if only it was more consistent.

I look forward to reading more of the author’s work. She was recently in India and I followed her travels with great interest on Facebook. Hopefully, when she comes to write the book, she’ll show us not just the country, but also more of what she thinks about it.