This is the first in a series of posts about my re-reading of selected Diana Wynne Jones stories. I will not be reading them in order of publication, but purely according to what I feel like next. I will also not be reading every DWJ book I own (thirty seven in all). 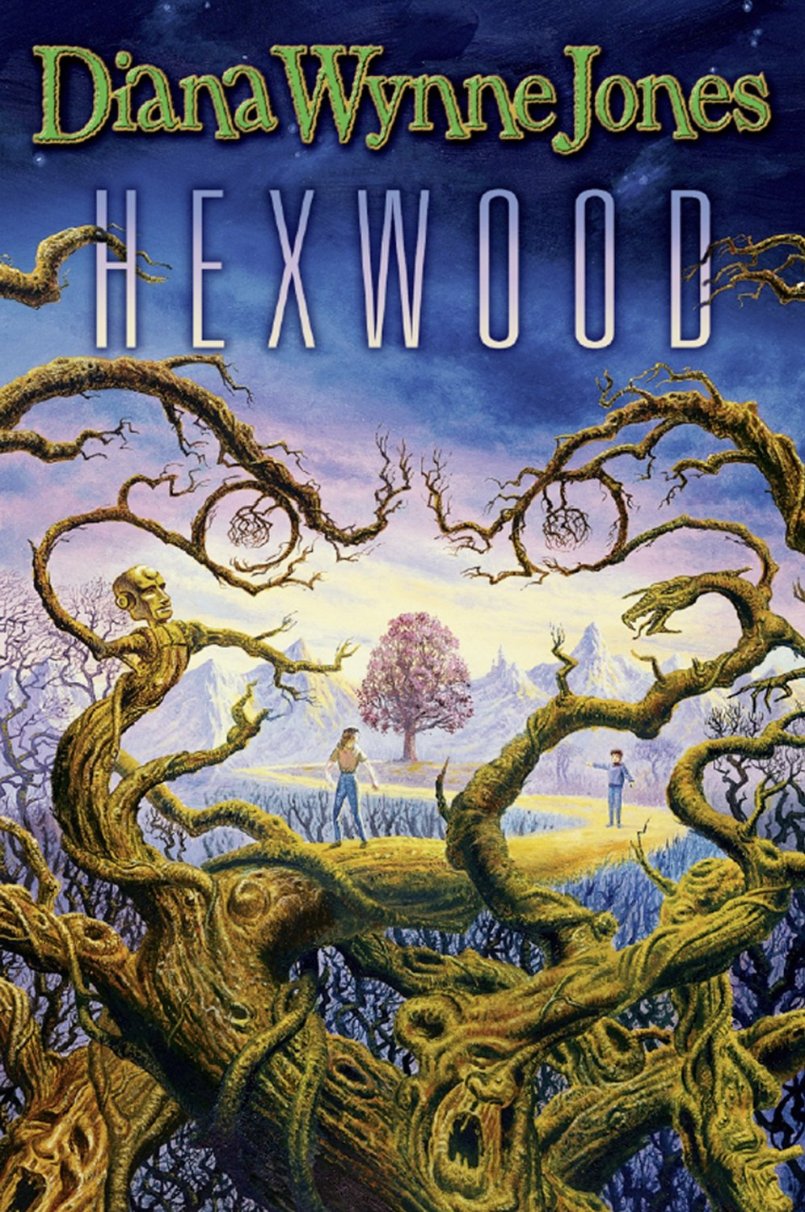 Cover of my second copy of Hexwood. I can’t seem to find the image of my first copy’s cover, which makes me wonder if I’m remembering it wrong.

My first DWJ re-read is Hexwood. I read my third copy of the novel. I left my first (paperback) copy on a chair in Amsterdam airport’s departure area while waiting for my connecting flight to Koln. My second copy (also a paperback) was lost somewhere in KL or PJ — I think it may have been in a post office or similar. The copy I have now is a hardback, ex-library edition, published by Methuen in 1993. I was living in England when Hexwood was first published, but I wasn’t aware of it. At that point I had only read The Time of the Ghost, which I had picked up at a flea market in Singapore. I do remember looking for DWJ’s books while living in England, but not finding any. Odd.

Hexwood is basically about a power struggle between a group of tyrants (who have lorded over a particular multiverse for more than a thousand years) and the machine that was created to ensure fair rule in that multiverse.

The multiverse includes Earth, a planet that is dismissed in every way by its rulers (the Reigners) except for the fact that it is the only source of flint, the multiverse’s most valuable raw commodity. Earth is also where the most powerful Reigner (Reigner One) has hidden the Bannus, the aforementioned machine that is supposed to select the multiverse’s new rulers every five years.

However, the Bannus, which has been sealed at Hexwood Farm (in a housing estate in England), is reactivated by the farm’s maintenance manager (Harrison) when he discovers its potential as a virtual reality simulator. The thing is, this is how the Bannus selects Reigners: by putting potential candidates through endless scenarios, based on set facts, in order to assess how suitable they are. The Reigners, alert to the threat it poses, take steps to shut the Bannus down for good.

Once activated, the Bannus traps Harrison and his staff on the estate, and extends its field of influence over a nearby wood (Banners Wood). As its influence and power grows, the Bannus causes those in its field to forget their identities and take on the roles it designs.

Ann Stavely is a 12-year-old girl whose parents own a grocerie shop in Hexwood housing estate. She is home from school, recovering from a viral infection, and notices the steady stream of visitors who enter the neighbouring Hexwood Farm, but do not emerge again. Ann decides to investigate and, to get a better view of the estate, she enters Banners Wood and is soon caught up in the Bannus’ field of influence too.

In the wood, Ann meets Mordion, who appears to be some sort of powerful enchanter. With his own and Ann’s blood (collected from a cut she gets falling on a stone), Mordion creates a boy, Hume. Hume is supposed to grow up to kill the Reigners whom Mordion says he has been fighting for centuries. Mordion and Ann struggle to look after Hume, who, Ann notices, is a different age each time she enters the wood. Mordion also finds and repairs a robot, Yam, to act as a kind of sophisticated nanny to Hume.

Ann notices that the wood is growing and its surroundings keep changing. A castle appears and seems to be filled with knights and ladies. It becomes Hume’s dearest wish to be a knight and slay dragons.

Meanwhile, the Reigners set out to deal with the Bannus. The first to journey to Earth is Reigner Two, who is accompanied by the Reigners’ Servant, trained to assist the Reigners in all ways, including as an assassin. However, each Reigner is pulled into the Bannus’s field, forgets who he/she really is and assumes a different identity. Reigner One and Three are the final two to set out, and they are accompanied by Vierran, a young woman believed to be the only friend of the  Reigners’ Servant.

What I love most about Hexwood  is how you have to work out what’s happening by piecing together the information you get. It’s all there, but you have to follow the story closely to make all the connections, between situations, between characters, between lives. Once you see how things link up, you’ll wonder why you didn’t get it in the first place — the references and hints are subtle, yet very strong. You just have to know how to read them.

I’ve read that Hexwood is sci fi rather than fantasy, and actually, although I know what the difference between the two genres is supposed to be, I don’t think about them being that separate. (I don’t like labels in the first place, but if I had to use one, I’d pick speculative fiction as covering everything that now comes under the fantasy and sci fi genres — it’s a more inclusive label.)

In Hexwood, the sci fi elements are softened by a familiar fantasy setting as the Bannus chooses an Arthurian knights-and-castle backdrop for the scenarios it replays, even presenting itself as a chalice, reminiscent of the Holy Grail. The multiverse is a technologically advanced one (and it’s implied that Earth is the most technologically backward of all the worlds, which I think would prove to be true if we ever do make contact with other universes — in fact, it’s likely the reason why we haven’t yet!), but the science is not another character in the story, neither does DWJ include tedious descriptions of machinery or technical processes that make you lose the plot entirely. Science is just there for practical reasons and you don’t notice it much most of the time.

Actually, as mentioned, what the Bannus does, which is very much to do with technology, is presented in such a way as to seem like magic. There is also actual magic, although I admit I have not quite worked out if it is magic or just the Bannus making it seem real. Of course, as someone who did not grow up with computers and before the Internet age, technology does frequently seem magical to me. But (and now I remember), the Bannus does say something, near the end of the book, that confirms that the magic really is magic. Hmm … why do I feel like I should re-read Hexwood again, like right away?

During this recent re-read of the book, there was a passage in it that I had not paid much attention to previously, but which struck me with particular force this time round. It is near the end of Hexwood, when the Bannus talks about how the wood was once part of the great Forest: ‘At the merest nudge, it forms its own theta-space and becomes the great Forest again. Ask any Earthman. He will tell you how, in this country, he has been lost in the smallest spinney. He can hear traffic on the road, but the road is not there, while there are sounds behind him of a great beast crawling through the undergrowth. This is the great Forest.’ (pg 247, Methuen Children’s Books, 1993)

The passage sends shivers up my spine because I have had that very experience: ‘lost’ in a tiny wooded area on Bukit Kiara, unable to find my way back on the tarred road just below it although I could hear people passing to and fro, and hearing ‘monstrous’ rustlings in the undergrowth.

It was strange to read something that described almost exactly what I had happened to me, and I really like to think that I got ‘lost’ on Bukit Kiara because the trees were remembering being part of a larger, magical thing and the small area I was in had expanded into this massive magical space.

What’s very good are the parts that involve killing and torture. They’re brief, with hardly any details, but the way DWJ writes them encourages you to fill in the blanks, and that’s much worse because you can’t not read your imagination.

I also like Hexwood’s non-linear narrative — horribly bewildering at first, but a brilliant, non-obvious way to illustrates how the Bannus works, and also reflect the confusion felt by the characters.

The main characters — Mordion, with his ‘face like death’, and short, stocky Ann — are not your typical protagonists, but then DWJ does not do typical. Mordion is especially intriguing. His actions and words raise questions, preparing you for a disturbing past that, once revealed, make his motivations, hopes and fears depressingly clear. Despite his frightening appearance, he is hugely attractive. (I really can’t agree with the way he is depicted on the cover of this edition of the novel!)

Hexwood is one of my top five favourite books by Diana Wynne Jones.

If I had to pick just ten of her books to keep they would be:

I will definitely be re-reading everything on this list, plus several more. It will be interesting to see if anything on my top ten gets replaced!