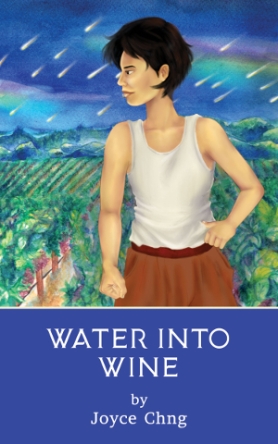 [Some minor spoilers ahead]

Xin inherits a vineyard and decides to embark on a new life (and career), packing up and moving, with her mother and children, to Tertullian VI.

Sadly, when the book ended I still had lots of questions about the character.

I had assumed that Xin was a woman (personally, I prefer female characters and somehow, I felt that Xin was female), but in the fourth chapter, the character announces that they have begun to ‘bleed again’. Apparently, Xin has been been living ‘as a man’ for some time and is on hormone therapy. However, living on Tertullian VI seems to have provoked a reversion to their female state that is more than biological: Xin starts growing their hair and, in Chapter Two, mentions wearing a nightgown.

For me, Xin’s gender identity is the most interesting thing about Water Into Wine and I wanted more space and words spent on it. I realise that the author might not have intended this to be the focus of the book, but I do feel that Xin’s search for identity is a central theme and I read it as a big reason for their move to Tertullian VI and their determination to make the vineyard work: new identity, new life, new purpose.

It would have enriched the story and also, the portrayal of Xin if this aspect of the character was explored in greater depth. I was also curious as to her mother’s thoughts on her decision (it’s mentioned that there is no objection, but I felt that more could have been said), as well as her children’s. The man Xin embarks on a relationship with says he is OK with Xin’s chosen gender (a chat with the author informs me that Xin sees themself as non-binary), but I would have liked there to be be more discussion between them, especially as Xin’s partner is revealed to have his own issues with his identity.

I have other questions: I want to know about the vineyard and I wonder why Xin doesn’t talk about it, or wonder about it. Perhaps she does, off the page as it were, but I want to know why it’s not being used; why it isn’t a working vineyard and if it ever was. I didn’t quite buy the way things fall almost effortlessly into place, and I felt that the lack of details makes Xin’s successful foray into the wine-making business somewhat implausible and a little too convenient.

Another thing I would like more of are the riding birds, the triches, which the author, Singaporean Joyce Chng, tantalisingly mentions a few times. We do not get to see them in action, nor do we even get a description of their appearance. Perhaps there will be a sequel, or another story set in the same universe and the triches will fly then.

They are just a detail though, and not essential to the plot. The war that breaks out is more significant, and I also wanted to know more about that. I felt it was important to develop this plot point more fully, considering what an impact it has on Xin’s life. As it is, it seems like the war is there simply as an excuse for the various kinds of conflict that are introduced into the story. Once again, I would like to see some of the issues that are raised explored more thoroughly. For example, Xin’s mother is vehemently against firearms, yet uses one quite expertly — what’s the story behind that? I am intensely curious.

I get it that Water Into Wine is a novella and its length would not allow for everything I’ve mentioned above to be expanded upon. The solution, I feel, would be to simplify the plot and storyline; better yet, this book should be a novel. It has enormous potential and just needs room to grow.

For information on how to purchase this book head to the publisher’s website.

Rating 3/5: Definitely worth reading, especially because of the strong protagonist.